The American Stroke Association in North Dakota is working on creating a culture of health in our state. They, along with NDBIN, are helping to raise awareness about the vital effect lifestyle has on health; especially staying active and eating nutritious foods.

The work of several committees, groups, and programs has had many accomplishments in developing brain injury services, dating back to 1987. 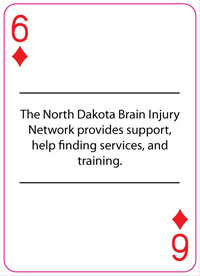